Dinosaurs are creatures that are admired by many and these awesome dinosaur duvet covers are a cool gift idea. There are adults and children who love these extinct creatures. Many people have an interest in dinosaurs because they are such cool creatures to learn about.

Many children love dinosaurs because they are interesting and they learn about them in school. This is great because it often inspires a lifelong love of animals.

Most dinosaur artwork or figurines feature earthy tones or bright childrens colors. Earthy tones are great because the suit a child's or an adults room. 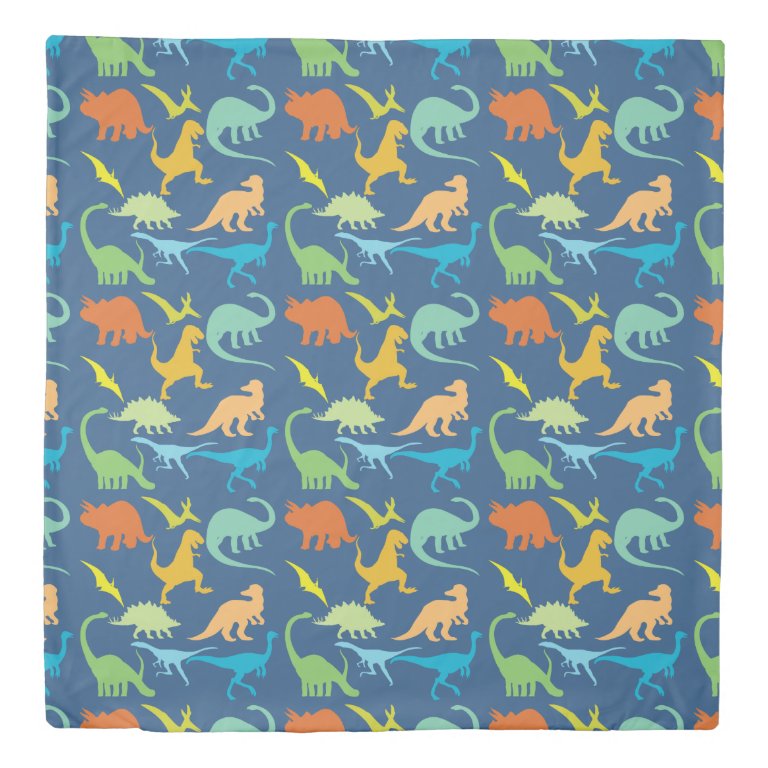 This bright duvet cover is perfect for anyone because it is available in three sizes. It is a nice choice for a childs room because the colors are fun and bright. The duvet cover is made from 200 thread count soft microfiber polyester. It looks great and is very comfortable to sleep under. 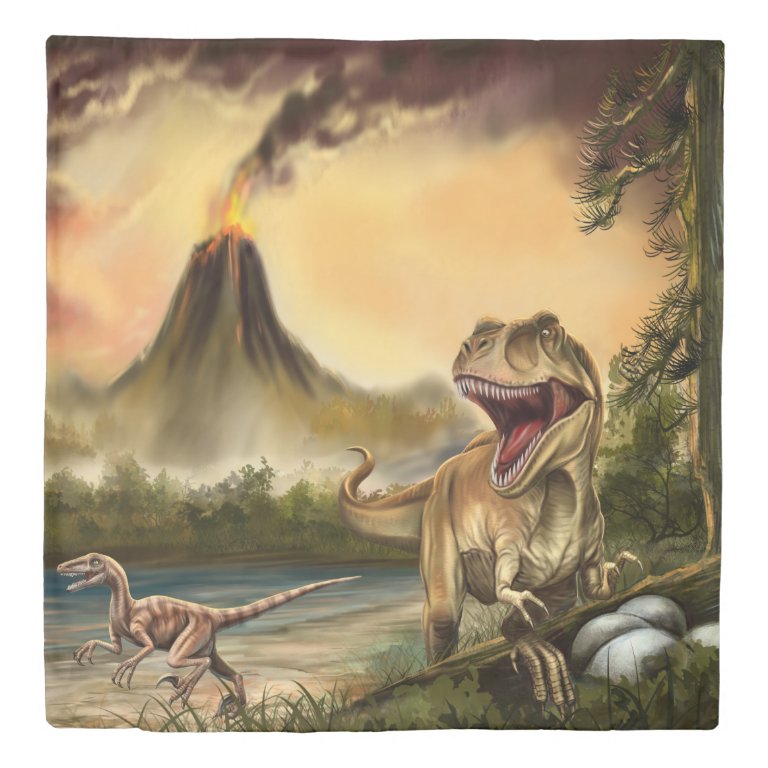 This duvet cover features an amazing realistic looking design that is sure to satisfy any dinosaur fan. Accent with shades of green, brown or other earthy tones. An easy care duvet cover that is machine washable and can be tumbled dry. 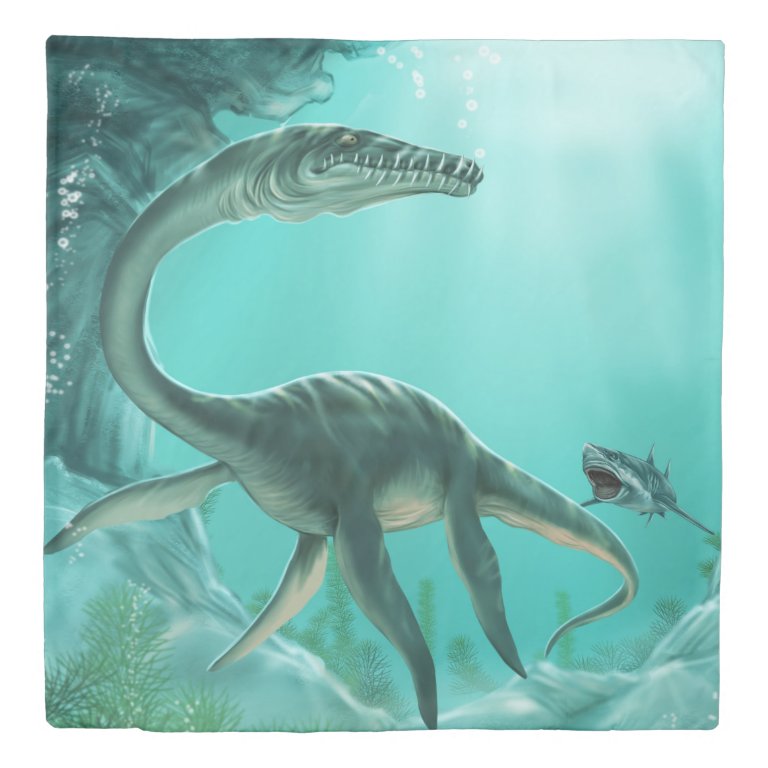 The beautiful underwater shades of teal and blue look great on this duvet cover. Perfect for any dinosaur fan who lives by the sea. Cushions or decor in any shades of blue and green will go with this nicely. Made in the USA. 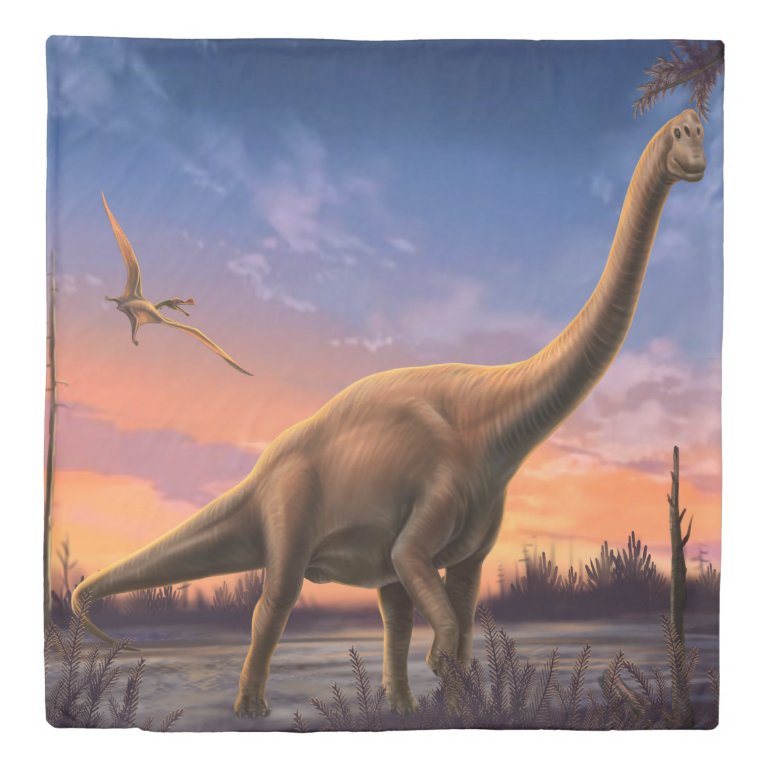 You will love the way that this duvet cover looks on your bed. The sky features soft earthy tones that look great. You can easily get pillows or cushions to match because of the common neutral tones. It is available in different sizes to suit any childs or adults bed. 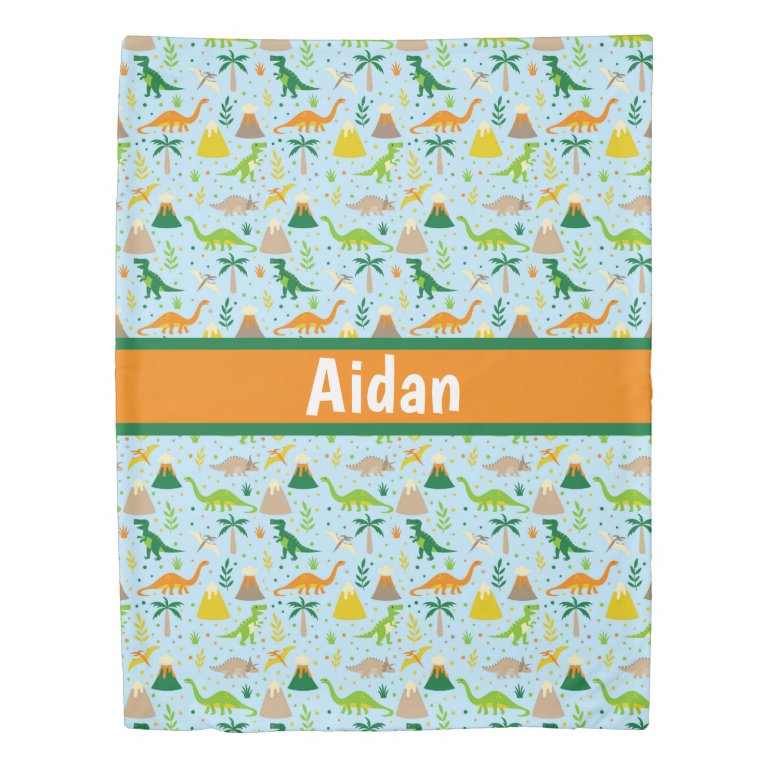 This one features an all over print of brightly colored dinosaurs, mountains, trees and plants. It is a customizable design which makes it an excellent choice as a gift for a child. If you have a child that has a lot of dinosaur toys this will blend in perfectly. The colors are playful, fun and sure to be a hit. 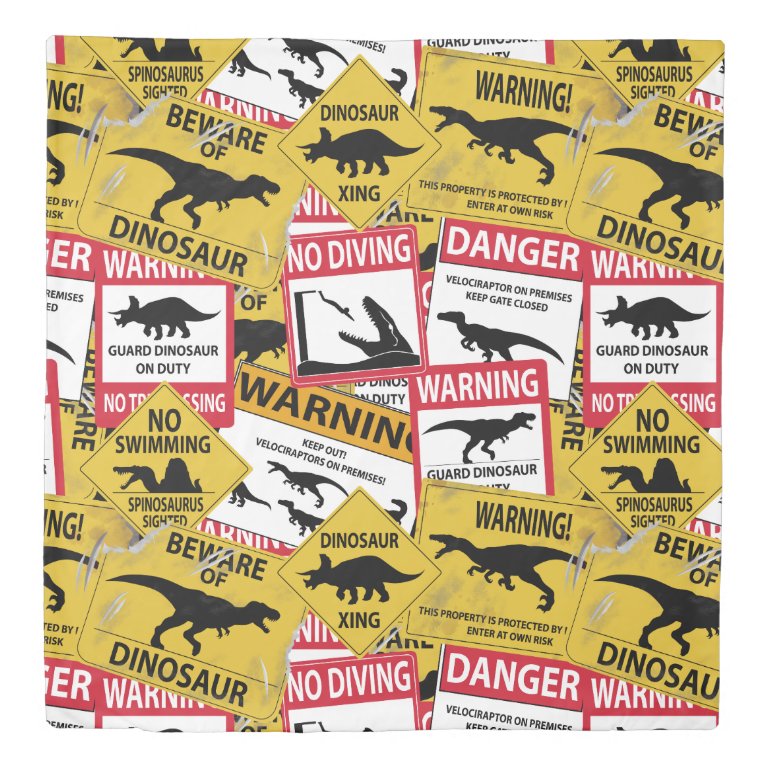 A duvet cover featuring a collage of dinosaur warning signs. Anyone who likes dinosaurs because they were big and dangerous will find this cool. The duvet cover shown here is queen sized but there are other sizes available. 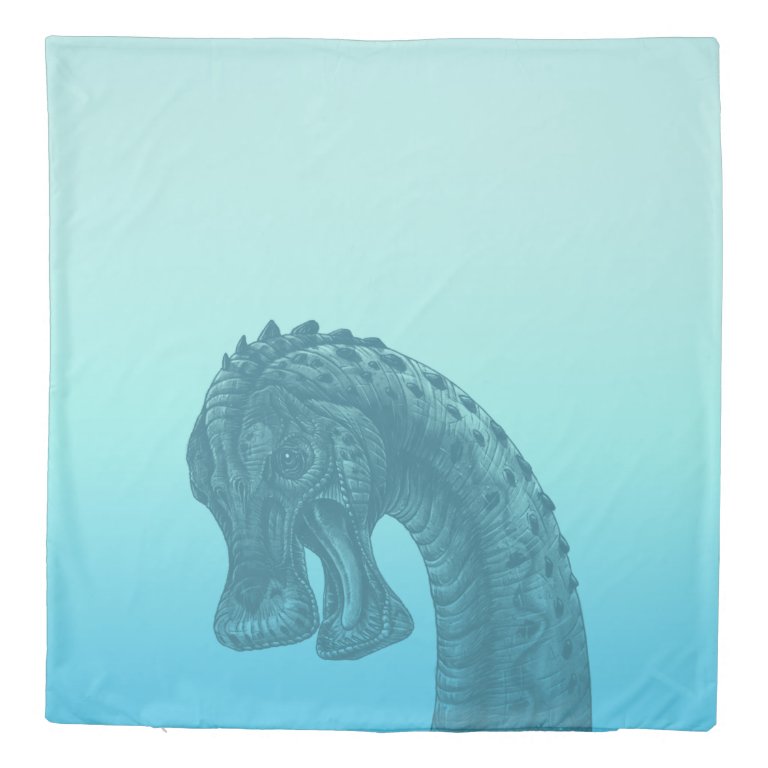 A dinosaur duvet cover in a lovely shade of blue. This is available in several different standard sizes. Easy to accessorise because any shade of blue or green will suit perfectly. You will love the way that it brightens up any room. 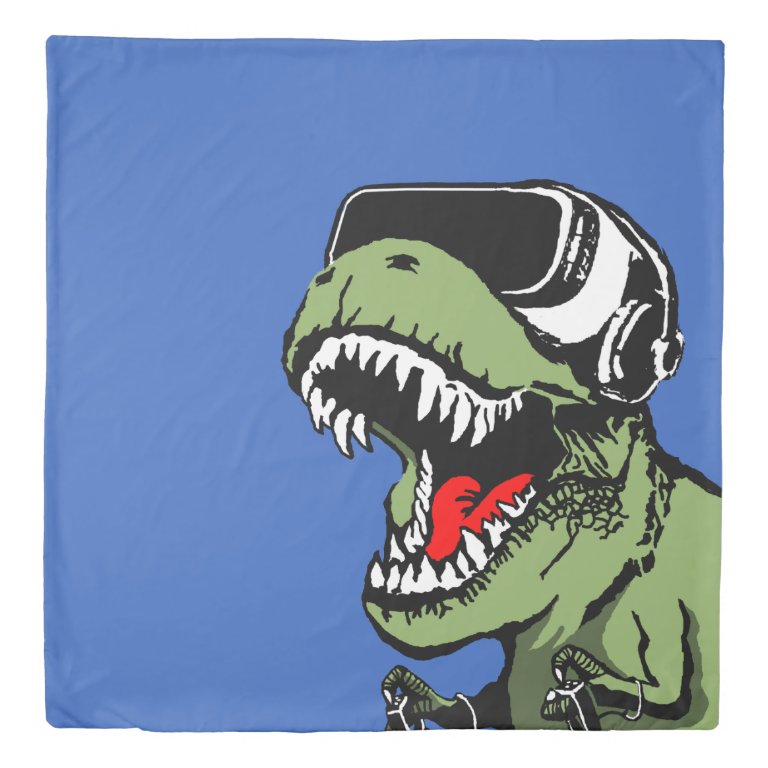 A brightly colored, creative t-rex duvet cover. This one is perfect for a teenager or pre-teen because of the street art style. Perfect for any bed because it is available in several sizes.

Dinosaur In The Wild Duvet Cover 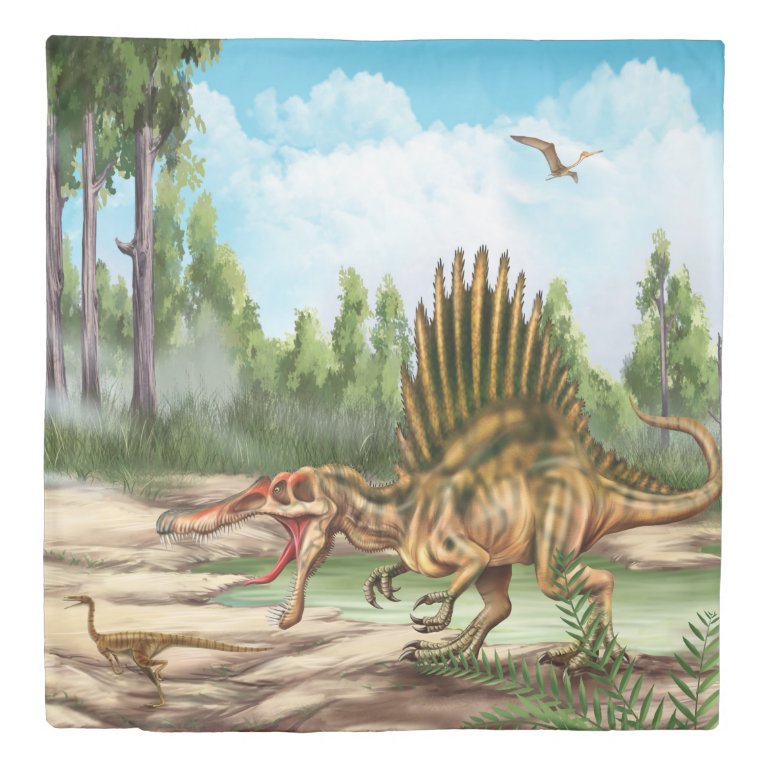 This one is fabulous because the artist has created such a detailed design. Perfect for any room because the neutral colors are sure to blend in. You can use it in the room of a child, teen or adult because the colors are not childish. A dinosaur fan of any age is sure to love this one because it is fantastic. 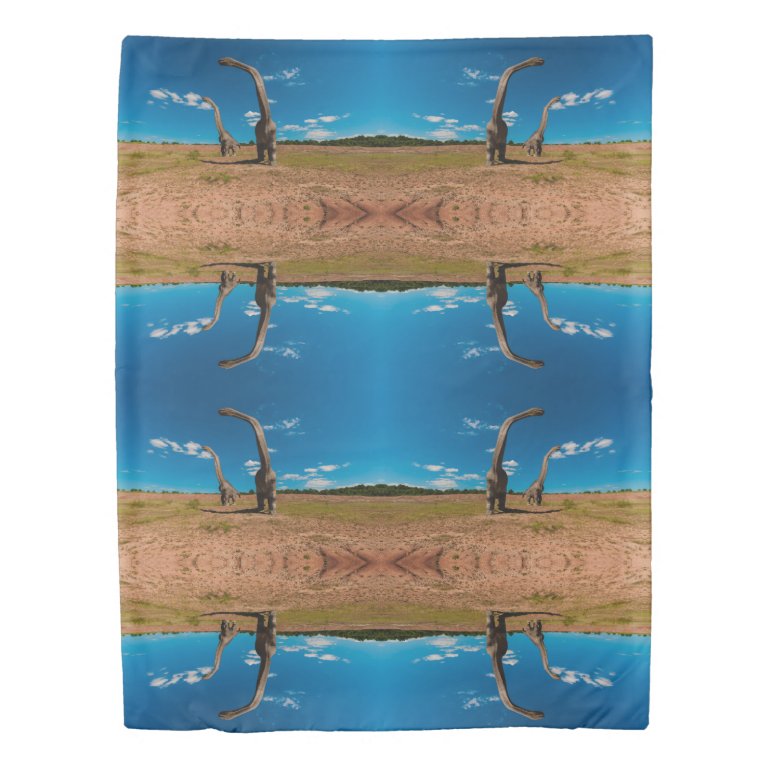 This cool dinosaur duvet cover is perfect for anyone because it comes in three sizes. You will love this design because of the photo realistic style. This set is perfect for a baby because of the soft color. It can be used for an adult too because it comes in two different sizes.

If you enjoyed checking out these cool dinosaur duvet covers you may also enjoy the following.

Funny Duvet Covers That Represent How You Sleep